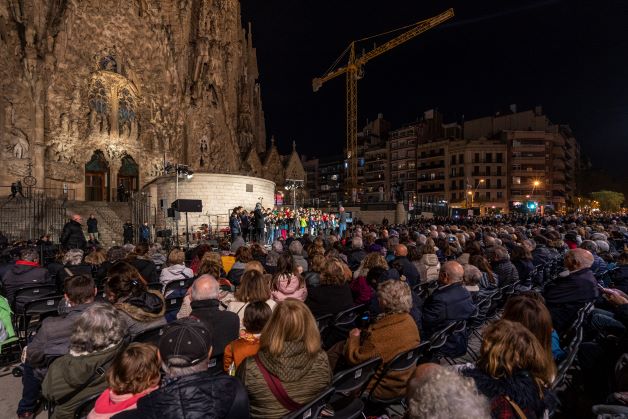 This Tuesday 20 December at 6:30 pm, the Sagrada Família hosted a carolling session on Carrer de la Marina, in front of the Nativity façade, with the children’s choirs and musicians from the five municipal music schools in Barcelona. The event featured some 300 students aged 5 to 12 from the children’s choirs at EMM Nou Barris, EMM Can Ponsic, EMM Can Fargues, EMM Sant Andreu – Mestre Pich Santasusana and EMM Eixample – Joan Manuel Serrat.

The children’s choirs and musicians performed under the light of the star on the tower of the Virgin Mary and the newly completed towers of the Evangelists Luke and Mark, also lit up; and in front of the Nativity façade illuminated specially for these days with the light shining on the sculpture groups of the Nativity, the Adoration of the shepherds and the Adoration of the Magi. This way, the Sagrada Família hosted a special carolling experience to share and contemplate the Christmas lights with the city of Barcelona. Esteve Camps, Executive Chairman of the Junta Constructora del Temple Expiatori de la Sagrada Família, said, “We are very happy to host this carolling session with the students from the municipal music schools in Barcelona. It reflects the Sagrada Família’s desire to open the Basilica up to the people, and especially children, for a very special experience at Christmas.”

Each school prepared a repertory of carols from around the world, which they performed in several shows. From the Nou Barris Municipal Music School, the XICS choirs of children aged 8 to 10 years old performed the songs M’he portat bé! and Regals amb el cor from a Christmas musical by US composer Sally K. Albrecht. The performance by the Can Ponsic Municipal Music School featured 5 and 6 year-old students accompanied by flutes and clarinets from the school’s wind orchestra, playing four traditional songs, the core of the standard Can Ponsic repertory. The students from Can Fargues Municipal Music School, aged 8 and 9, took the audience on a journey around the world with the songs Noi quin fred! from Catalonia; Huahuanaca, from Bolivia; Aguinaldo from Galicia; and Santa Claus is coming to town. From the Sant Andreu-Mestre Pich Santasusana Municipal Music School there was a mixed group of students between 5 and 11 years old, who performed Les figures del pessebre, written by John Llongueras. Finally, the Baloo2 choirs of 7 to 9 year-olds and the Crescendo choir of 10 to 12 year-olds from the Eixample-Joan Manuel Serrat Municipal Music School played two Catalan Christmas carols by contemporary composers and finished off with the famous Hallelujah: A Soulful Celebration, by G. F. Händel.

Afterwards, representatives from each of the five municipal music schools in Barcelona sang a traditional Catalan Christmas carol together and the Sagrada Família presented each school with a gift to thank them and help them remember this special day: a figure of the sculpture group of the Nativity from the façade.

The children’s Christmas carolling is part of the programme the Basilica has prepared to invite citizens to experience the spirit of Christmas and prepare to celebrate the arrival of Jesus. Check out all the activities here.