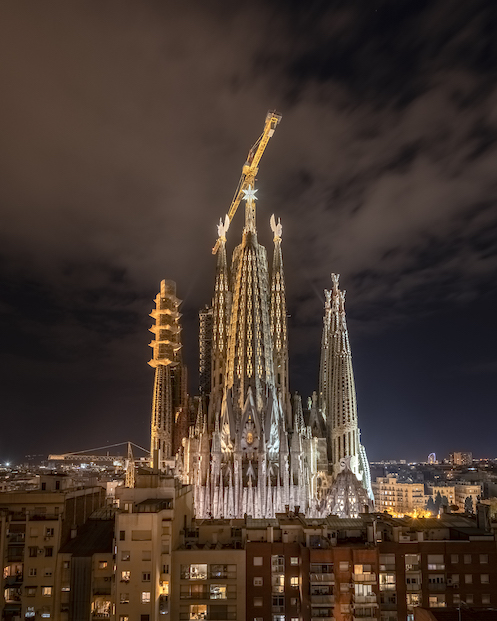 This Friday, 16 December, as the traditional Christmas Concert at the Basilica let out, the Sagrada Família illuminated the pinnacles on the towers of the Evangelists Luke and Mark for the first time, commemorating the end of construction. So, with the tower of the Virgin Mary inaugurated on 8 December 2021, three of the six central towers are now finished. “The Sagrada Família is now focusing its efforts on finishing the core of the central towers,” noted Esteve Camps, Executive Chairman of the Junta Constructora del Temple Expiatori de la Sagrada Família, adding, “We expect to finish the towers of Matthew and John by late 2023 so we can inaugurate the whole grouping of the Evangelists.”

As part of the central group of towers, the four towers of the Evangelists surround the tower of Jesus Christ, standing 135 metres tall, the Temple’s third tallest. To identify which Evangelist each tower represents, as per Gaudí’s designs, the towers are topped with the corresponding figure of the tetramorph, with the book and wings. These figures have been used for centuries to represent the Evangelists in Christian iconography, art and architecture. So, the sculptures illuminated today for the first time were the figure of the ox on top of the tower of the Evangelist Luke and the figure of the lion, representing the Evangelist Mark. The towers will be lit up every evening from 17 December through 8 January from 6:00 pm to 10:00 pm. For the Christmas season, the sculpture groups of the Nativity, the Adoration of the shepherds and the Adoration of the Magi on the Nativity façade will also be lit up.

The symbology of the tetramorph

The four figures of the tetramorph that crown the towers of the Evangelists form an aureola around the tower of Jesus Christ and its cross. The word tetramorph refers to an iconographic representation of a whole comprised of four elements. In this regard, according to Christian iconography, the figures of the tetramorph represent the four Evangelists, the men who told the story of Jesus’ life: a man or an angel for Matthew, a lion for Mark, an ox for Luke and an eagle for John.

The tower of the Evangelist Luke completed this year is crowned with the sculpture of the ox. According to tradition, Luke was a physician converted to Christianity by Saint Paul, who he served and followed everywhere. Given his kind, obliging manner, he was given the symbol of the ox: a humble, docile, hard-working animal.

On the other hand, the tower of the Evangelist Mark is topped with the figure of the lion. In the Gospel, Mark shows us Jesus as an adult during the solemn ceremony of the baptism and how he later lived in the desert among wild animals. This is why he is given the symbol of the lion. Tradition has always considered this animal a representation of strength, courage and royalty.

The figures of the tetramorph, by sculptor Xavier Medina Campeny, are made of Thassos marble, a white stone used since ancient times for Greek and Roman sculptures. The same material is used for the Book of the Gospels that appears with each figure, which features the abbreviations corresponding to each Evangelist in trencadís mosaic, in different shades of red. Each tetramorph figure also has wings on top, the same on all four towers of the Evangelists, stretching up to a peak height of 135 metres above the ground and clearly visible from a distance. As Sagrada Família head architect Jordi Faulí explains, “The wings are generated with one of the shapes from Gaudí’s last ruled geometry: a great elliptical hyperboloid.” This element, 9 metres tall, is made of cement, with highly complex geometrical steel reinforcement of outstanding quality and strength.

The Sagrada Família is focusing on completing the six central towers. The Junta Constructora de la Sagrada Família is working towards the goal of finishing the towers of the Evangelists John and Matthew by late 2023 to inaugurate all four towers of the Evangelists in the final quarter of 2023. And the tower of Jesus Christ is expected to be completed in 2026, coinciding with the hundredth anniversary of Antoni Gaudí’s death and the celebration of Barcelona as the Word Capital of Architecture (UIA-UNESCO). The tower of Jesus Christ will be the central tower of the Temple and its tallest, standing 172.5 metres tall, just lower than the mountain of Montjuïc.